In 2016 the two theatre artists Helene Høm and Thomas Danielsen opened UNDREVÆRKET in a former missionary church house in Gudhjem on the small island Bornholm in the Baltic Sea.

We have our artistisc working studios in the house and produce and arrange performances, exhibitions and lectures on professional level.

We also arrange international theatre courses, offers “production in residence” where groups and artists can come to Bornholm to work on their own projects, and we do our best to support the local cultural activities on Bornholm.

We have a beautiful working space with wooden floor, eight windows (that can be darkened) and a wall mirror.  We are working to create at small flat for artists to live in during their work and stay – but until then, we can help you find accomodation in Gudhjem for reasonable prices.

THOMAS DANIELSEN, born in Denmark in 1961 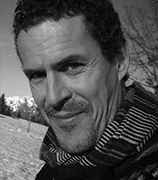 From 2009-2014 he also studied acting with Paul Oertel and Nancy Spanier in France/Discipline of freedom. Thomas is a teacher in the Feldenkrais method and studied psycho therapy since 1998.Since 1989 he was co-leader of Teater Patrasket in Copenhagen,  touring international for more than 25 years .

Studied BA in visual theatre arts and graduated from the state academy ”Norwegian Theatre Academy” (today NTA) in 2004. Helene Høm worked as interdisciplinary theatre artist,testing and crossing the boarders between theater and visual arts for more than 15 years,also creating costumes and scenography.

Since 2018 she works as a visual artist.